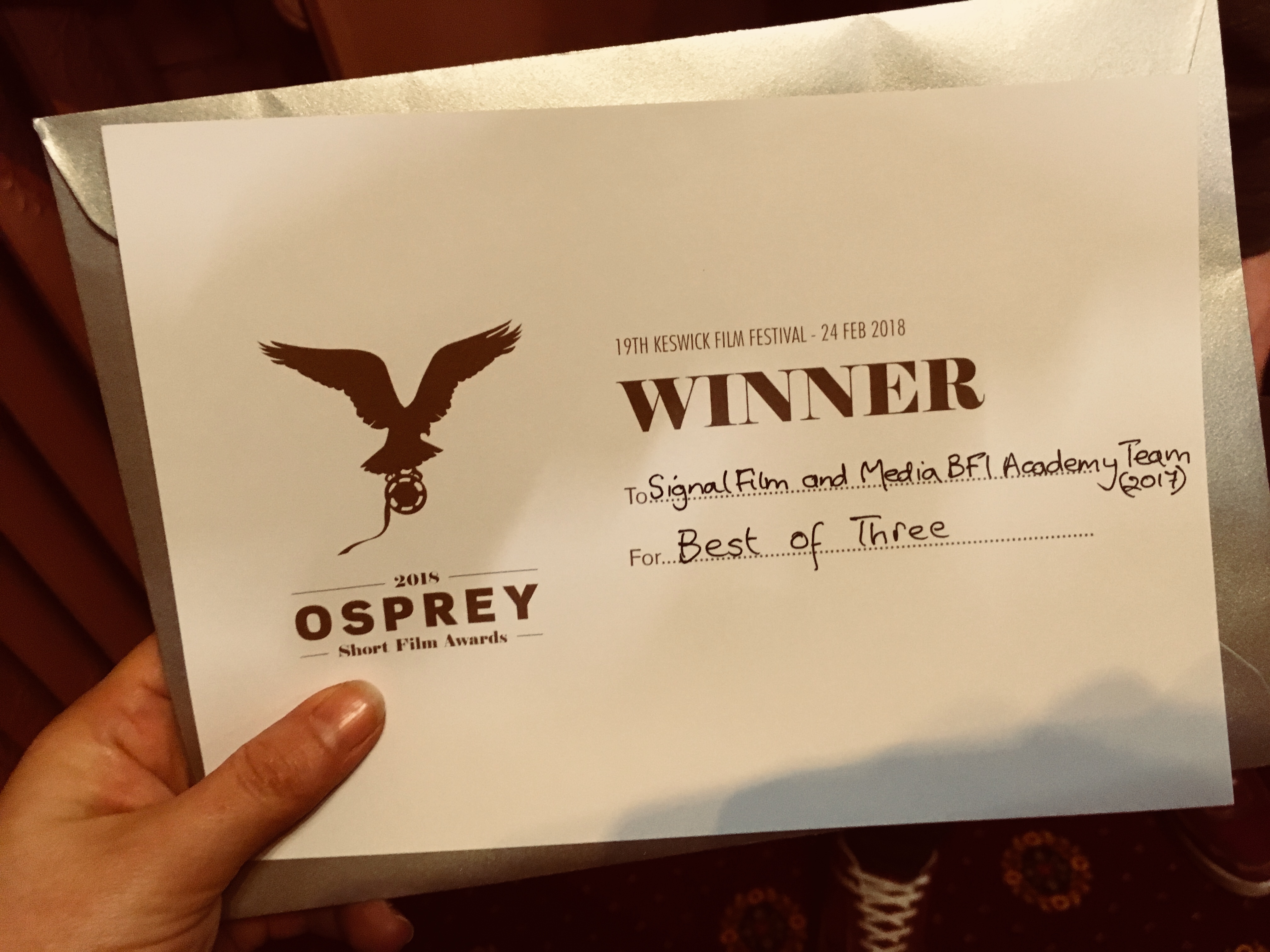 Signal Film and Media is delighted to announce that the BFI Film Academy 2017-18 has won the Judges Prize at the Osprey Short Film Awards at Keswick Film Festival 2018 with post-apocalyptic drama BEST OF THREE.

The Osprey Short Film Awards took place on Saturday 24th February 2018 from 1pm at The Alhambra cinema in Keswick, Cumbria as part of the 10th annual Keswick Film Festival.

‘Best of Three’ is a drama – set within a bunker, in a mysterious post-apocalyptic world – which follows a man’s anxiety as he waits for his wife, who is tasked to re-fill their dwindling energy supplies. It was created by group of 16-19 year olds for this year’s BFI Film Academy (2017/18).

In addition to receiving a congratulatory certificate after being one of the nine shortlisted titles that made the Official Selection at the Osprey Short Film Awards, ‘Best of Three’ was then selected by a panel of independent judges. The film received another certificate & was awarded the £200 prize and certificate to BFI Crew member Jake Tracey by actress and musician Lisi Tribble, the widow of pioneering film director Ken Russell who like actor John Hurt, was a patron of the festival.

This years’ Osprey Short Film Awards celebrates their tenth year promoting local filmmaking with a selection of drama, documentary, animated and experimental films. Many of which were shot in locations in Cumbria including Keswick, Carlisle and Windermere. Those who made the official selection include professionals, amateurs, students and young people, some as young as eight years old. With contributions from individuals, from small groups of collaborators and from fully fledged film-crews.

Watch the Behind the Scenes here:

Signal Film and Media were also shortlisted with another film in the Osprey’s with 2016’s stop-motion animation by Signal Starters;  ‘The Day Before Christmas’. Staff members Sophie Broadgate (who also produced ‘Best of Three’) and experimental artist filmmaker Julia Parks were also selected for the shortlist at the 2018 Osprey’s with their own independent projects “A Circle Film” and “Get on the Moving Circuit”.