“The mill was built in 1870 by a syndicate of local businessmen with ties to the railway and steel companies. They employed William Gradwell, a local builder, to construct the mill, and it doubled in size within three years of being completed. By 1880 the mill was sold to Walmsley and Smith, Millers and Corn Merchants, and then to Edward Hutchinson Ltd in 1903.

The mill was considered extremely innovative. It was the first building in Barrow to be lit by electric lighting, which was installed in 1885, and it soon adopted the Hungarian roller technique of grinding grain. It was the first corn mill of its type to be fitted with an automatic sprinkler system, in the late 1880s. It was initially connected to a large dockside warehouse, although in the early 20th century four steel silos were built to cope with its increased capacity.” (millsarchive.org)

This appears to be an advertising campaign card. Diamond 0 was a brand of flour with the zero showing the grade of milling. It doesn’t seem to match current specifications. Here’s an advert from a shop in Wellington Street, Millom from The Millom Gazette in 1902. One shilling and fourpence a stone (6.3kg) is about £0.06 and ten stone would be £0.63.

The mill was closed in 1967, and then destroyed by a fire in 1972. The site is now the Cornmill Crossing Retail Park with B&Q’s store and car park replacing the mill and the extensive railway sidings. 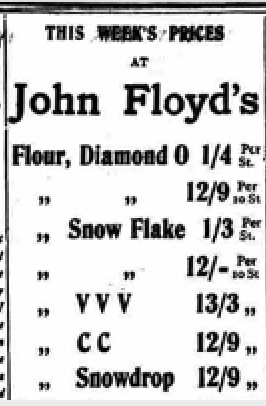