Celebrating the lives and Heritage of the past residents of Barrow. Sharing Stories and images from The Sankeys Family Collection and personal collections of people living in and around Cumbria. 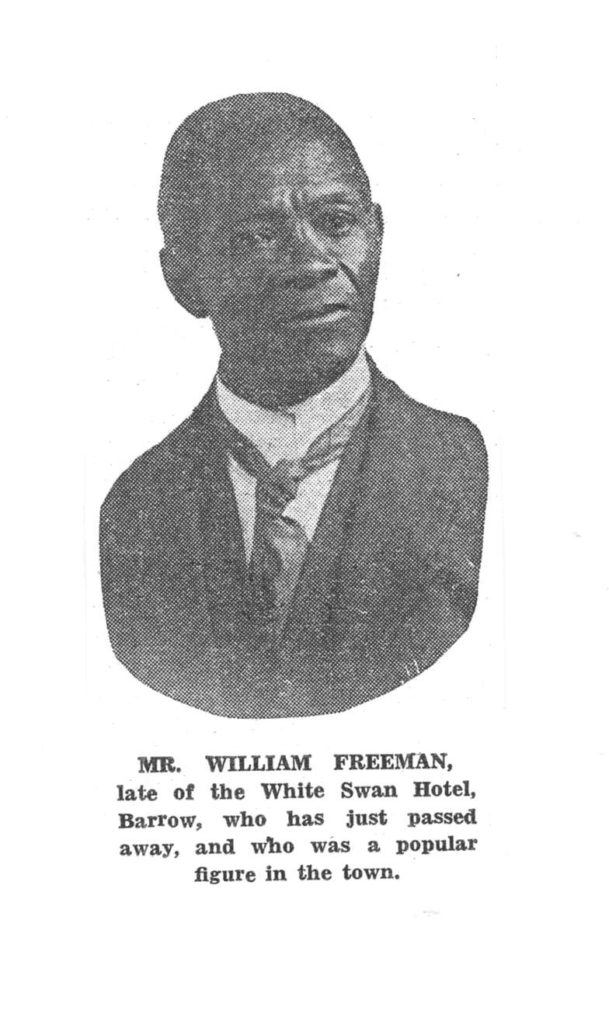 The story of William Freeman is an old story, but unfortunately, it was also a forgotten story. When I first chanced upon some details about William a couple of years ago, I thought that if possible I would like a new audience to know more about him. Signal’s involvement in Black History Month, presents the opportunity to have William’s story more widely publicised.

William Freeman was perhaps best remembered as Barrow’s first Black pub landlord. Yet before 1893, when he took over the Old Swan Inn (corner of Scott St and Dalkeith St) he had already become a popular hackney cab driver in the town; recognised for his ‘immaculate velvet dress jacket and dickey bow tie’ along with his customary smile, ‘and impeccable manners for all those he met.’

Driving a cab must have felt like a step up from William’s earlier work as a coal miner in Yorkshire; thought to be his first job after he arrived in England. The 1891 census was the first to record William living in Barrow. It lists him as 38 years-old, a cabbie, living at 4 Duncan St, with his Scottish wife, Margaret (28), and three children Charles (9), Edith (8) and William (5).  That document states he was born in India, corrected in the 1901 Census to Barbados – in the West Indies. His surname is indicative of his antecedents; he was likely the descendent of slaves. (The census taker probably reduced the West Indies to India, but this is no small issue. Immigrants of all races, in many countries, find records of their families littered with incorrect information, creating difficulties in tracing their heritage).

Two years after his first appearance on Barrow’s census, William was licensee of The Old Swan Inn.  Built in 1864, the pub at No 59 Rawcliffe Street – named after the Inn’s builder, Joseph Rawcliffe – was quite different from many other beer houses of the time. Most of them were no more than converted dwellings, but the Old Swan, one of Rawcliffe’s better-built establishments, had a bar on the ground floor, with upper floors for lodgers. There was separate accommodation for the landlord and his family next door, at No 57. (The street name was changed to Scott Street around 1868).

Despite it being a good career move, by the time William took over tenure The Old Swan Inn was a run-down establishment; one that had witnessed the rough and tumble of Barrow’s Chicago Years. Sitting in the middle of the town, with a large number of other pubs and beer houses nearby, it was a popular watering-hole on pub crawls.

William, however, was not lumbered with a decrepit pub. In 1897 the owners, The Manchester Brewery, invested a substantial amount in building a brand new hostelry. The old one was demolished, and replaced by one which had an exterior design almost identical to The Washington (Roose Road) and the Buccleuch Hotel (Hindpool Road, bomb damaged in WW2, demolished 1957).

No doubt William’s step up in the world, running a modern hotel, helped him become chairman of the Licensed Victuallers Association, which represented over 60 licensed premises.

Yet despite his standing in the town, William, one of very few black people in Barrow, did not have a trouble-free time; he had to put up with a racist nickname. We won’t give that name here; repeating an offensive moniker foisted on someone would not be acceptable. William’s experience, of course, was common to many immigrants across the British Isles. Most incomers, regardless of their skin colour, including the Irish, Scottish and Welsh suffered humiliating and degrading nicknames. The smattering of people from other nationalities in Barrow – the Chinese, French or Germans for example – also experienced racist or nationalist insults. Depending on the political climate between various countries, fights could break out, or people could face physical intimidation and abuse. The sailors of different nations temporarily posted to Barrow probably also got their fair share of ‘unkind remarks.’

William, though, was not by any means held in disregard. The crew of the Royal Navy Battleship H.M.S. Hazard (see image below), accommodated at the Old Swan in 1902 before the ship’s sea trials, repaid ‘Mr Freeman’s kind hospitality by conducting a fully-illuminated military salute to the landlord.’ 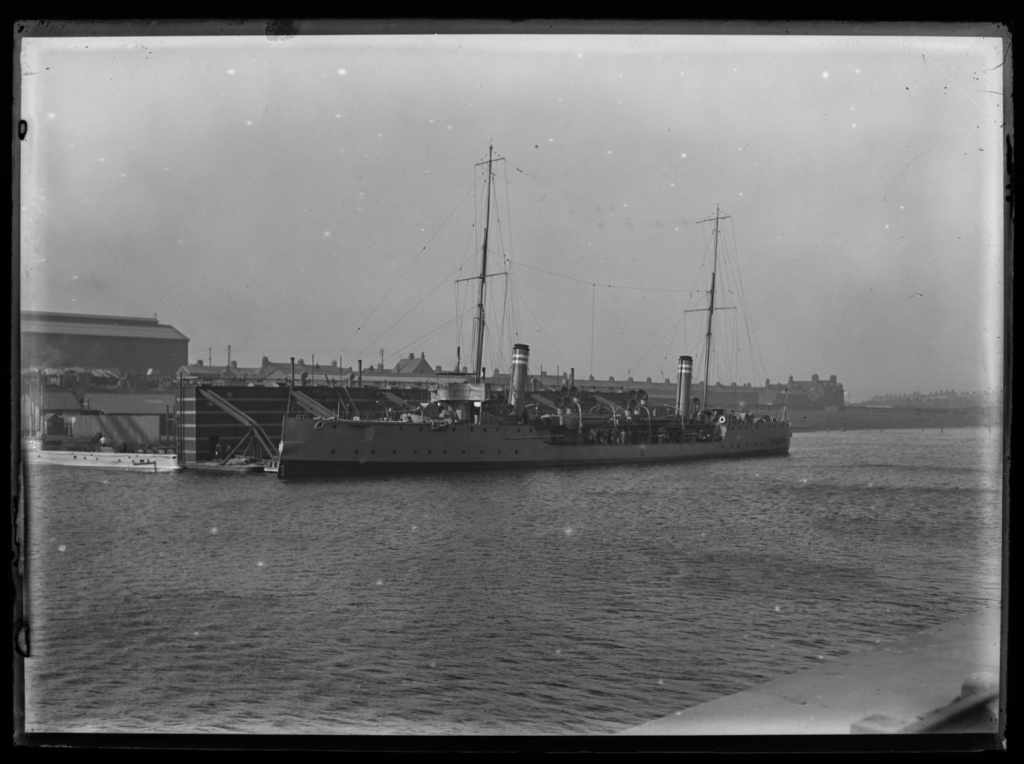 The photograph above shows the Old Swan Inn before it was demolished in the early 1960s, during redevelopment of the town.

It had closed as a pub in 1922, and soon after became the Wu-Su laundry and dry cleaning service.

The photograph below shows Scott Street in 1914. Mr Freeman’s pub was the tall building, located at the end of the block of houses on the left-hand side of this image.

William appears to have held a special place in the hearts of many Barrow people too. It was recorded that ‘the people of Barrow were sad to see him leave town during October 1904.’ Before he left, to take over the Duke of York Hotel, Preston, a farewell supper was arranged at the Welcome Hotel, organised by the town’s Licensed Victuallers and Beer and Wine Association Traders the dinner was as a token of respect from his former colleagues. As a further measure of the esteem in which they held William, he was presented with a Purse of Gold as a leaving present. (A cash donation from well-wishers) His eldest daughter, Miss Edith Freeman, was also presented with a gold brooch for her ‘assistance in helping her father out with the running of his Inn.’

A short article published in 1933, about William’s funeral at St Patrick’s R.C. Church, Barrow Island, recalled how popular he had been, and noted that both his sons and his daughter attended. William was aged 73 when he died.

The Old Swan Inn, along with half of Scott St, was demolished in the early 1960s. To read more about the pub, and many others, we recommend Alan Wilkinson’s The Beer Houses, Barrow in Furness (published 2018).  We thank Alan for letting us quote from his book.

The 1911 census records Mrs Freeman as living at 102 Scott St (one block along from the Old Swan) She lived with her youngest son William; a pattern-maker in the shipyard. The response to a question on that year’s form, of how many children had been born in a marriage and how many still lived, reveals that of the five children born to the Freemans, only three were still alive.

The 1925 Year Book has a Mr W Freeman (William Jnr) living in Lord Robert’s Street, along with a Mrs Freeman (his mother), and a Mrs Ward (Edith’s married name) also listed.

Joseph Rawcliffe was a well known and somewhat controversial builder of pubs and streets in Barrow during its Victorian boom years.

Many thanks to Bill Myers for contributing the photograph of William Freeman and the mystery Carte De Visite below.

Many Thanks to Susan Benson from Barrow Archive and Study Centre for sharing records with us.

WHO IS THE MAN IN THIS PHOTOGRAPH?

Black Memories Matter is a collaborative project between M-Unit, Tullie House Museum and Carlisle Library and Archives to address the lack of diversity within Cumbria’s collections. All our research findings will also be shared with this project. Please find out more by visiting:
https://www.munitcarlisle.co.uk/black-memories-matter.html
We will continue to share our Stories and findings for Black History Month and beyond. Make sure to share yours too!